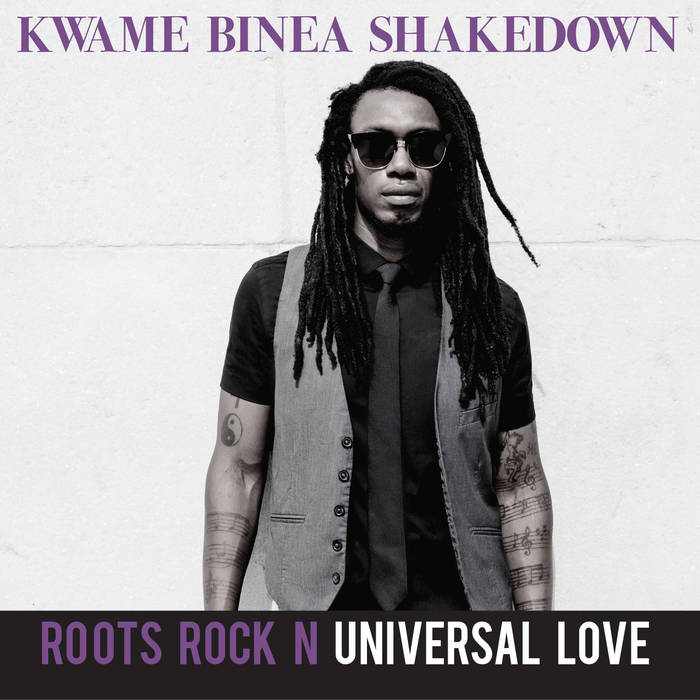 “Mix Rock and Roll with Silky Soul, screaming blues with folk and you get Kwame Binea” The Apollo Theater

NYC - Soul rocker Kwame Binea was born in West London with native origins in Ghana. He has peppered his music with a unique brand of “Roots Rock” which embodies his fertile and culturally diverse personal saga.

“Universal Love” by Jimmy Cliff, a featured track on his new debut album “Roots Rock n Universal Love,” was produced by Vernon Reid of the group Living Colour who also co-wrote the tune “Love Surreal.” Of the process, Vernon says, “Kwame connected to 'Universal Love' immediately. He brings a fresh perspective and a renewed sense of hope to this seldom heard classic.”

Kwame Binea has a charismatic, soulful, & romantic vocal approach to Pop suffused with Rock energy. Though not a political message artist per se, he does not shy away from questioning modern issues. “Roots Rock n Universal Love” is Kwame's epic answer of how to inspire people while also making them dance.

“Mix Rock and Roll with Silky Soul, screaming blues with folk and you get Kwame Binea” says The Apollo Theater. “My music is organic,” says Kwame, “it embodies life, love and struggles. I'm driven by my mantra of Peace, Love & Positivity so that propels and drives the messages for most of my lyrical content. It's also party music and danceable, so if our music moves you and makes you move, that’s a great night”.

“From the very first moment that I heard 'Universal Love' by the reggae legend Jimmy Cliff from his album 'Give Thanks', I've been entranced with the song's message, and it's powerful melody. Unconsciously, I've been looking for a way to realize a new version of this wonderful song. When I met Kwame Binea, heard his voice, & saw him perform, I knew that if Kwame could connect to the song that we could create a version relevant to the turbulent times we find ourselves in.” - Vernon Reid

Says Kwame, “The concept behind the new Album is essentially to make music that makes you dance and also makes you think. To me music should not only make you move but it should also inspire and educate. The writing process for the Album was an amazing process, the majority of the music was written by me and my guitarist, Justin Wilcox. It typically starts with a tune on the acoustic guitar, we hash out the groove and lyrics then present it to the Shakedown who add a lot of energy and dynamics. It was truly an amazing experience to have the opportunity to write with Vernon Reid. As a black soulful/Rock artist Vernon Reid, has and still inspires me. He is a true musical giant and most importantly, he is a kind and caring person.”

In 2009, when Kwame teamed up with songwriter/guitarist Justin Wilcox, his artistic identity began to really surface and flourish. He transplanted to Harlem and they started performing covers and a few originals as an acoustic duo in clubs and coffee houses around New York City. There they built up credibility with their guitar driven acoustic live performances and also drew some attention from other NYC/NJ musicians playing the same circuit of venues.

Initially drummer Medley Shabazz joined the duo, then bassist Phil Bassaragh and guitarist Art Vanterpool. In 2011, the core 5-piece band started playing in clubs throughout the city. The band sometimes features horn players, Brian Varneke (trumpet) and Kengo Yamada (saxophone).According to legend or myth (depending on who tells the story) the band earned its name Uptown Shakedown because the walls in Kwame’s apartment in Harlem used to shake when they rehearsed . It was later truncated to just Shakedown.

Kwame and the band have fed recordings and live endeavors with an unyielding spirit and intestinal fortitude that is strikingly visible in his artistic growth. They continue to draw a legion of loyal fans with electrifying and inspirational performances at most of New York City's most celebrated venues including Brooklyn Bowl, Joe's Pub, Mercury Lounge, Rockwood Music Hall, Aaron Davis Hall, Sullivan Hall, Shrine & Silvana, The Bitter End and a Summer Residency at the iconic Arlene’s Grocery in the LES.

In 2015, was the release of their self-titled debut EP with celebrated singles “Let Go” and “Little Lady”. The guys then embarked on a national tour in the fall of 2015 taking them from Vermont to California and everywhere in between. In 2016, the band would set out on the road to play during SXSW in Austin, TX then overseas on a 3 nation European tour hitting Netherland, Belguim and the UK. On their return states side, they had a SOLD OUT performance at historic Apollo Theater Music Cafe.

In support of Kwame's new album release, he will be debuting videos for a few cuts off the album as well as working on a North American and European tour. In closing Kwame has this to impart, “The message I want to impart on listeners is: With music and actively living with Peace Love Positivity, we can and will find the answers that we are all searching for.”

Kwame Binea was born in West London with native origins in Ghana. He is a self-proclaimed rocker to the core, but he has peppered his own brand of “Roots Rock” which embodies his fertile and culturally diverse personal saga.

Bandcamp Daily  your guide to the world of Bandcamp